Note: This post was originally written by David Ketcheson.

The stability function completely characterizes the accuracy and stability of the method when applied to linear problems.  Consider the first order linear, autonomous ODE

where now $u$ is a vector and $L$ is a square matrix.  The numerical solution will be

The global error satisfies a similar recurrence; in particular, it gets multiplied by a factor $R(hL)$ at each step.  Let $\lambda$ denote any eigenvalue of $L$; then If $L$ is a normal matrix, the solution will be absolutely stable in the Euclidean norm if all values $h\lambda$ lie within the stability region $S$, defined as

Thus the region of absolute stability defines the portion of the complex plane in which a given numerical integration method may appropriately be applied.

While this promises to be very useful for some problems, it also has an aspect that's just fun: we can generate stability regions with unusual shapes.  I haven't explored this much yet, but a first question that we ask in the preprint is how to generate a stability region for a spectrum of eigenvalues forming a rectangle in the left half of the complex plane.

Here is an example of a resulting stability region: 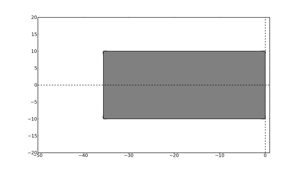 The gray region is the set $S$ for a certain degree-20 stability polynomial corresponding to a consistent twenty-stage Runge-Kutta method.  As one colleague told me when I showed it to him, "this seems too good to be true; is that rectangle really the stability region?"

Indeed it is.  Zooming in on the top edge we see the detailed structure of the boundary: 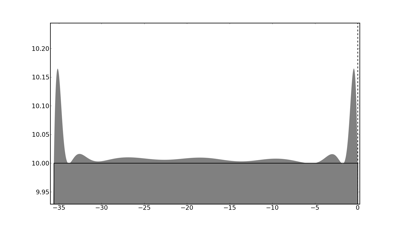 Zooming in even closer: 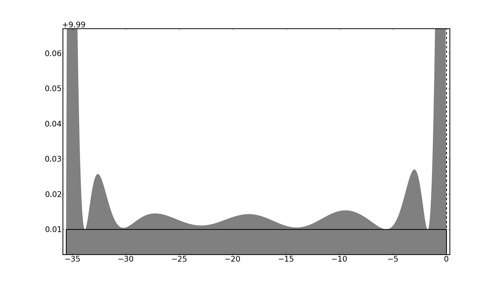 As is typical with optimal stability polynomials, we se that the boundary is tangent or nearly tangent to the desired region at a large number of points (about 20 in this case).

What other shapes can be approximated?  More on that later...

Archieves by date, by category, by tag.